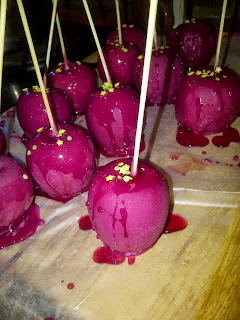 For the past ten or so years I've been doing face painting at our church's annual fête and as soon as she could my sister joined in…this year we decided (read; my mom decided) we would also whip up some toffee apples…being that it has been ages since we tried and my mom's memory was sketchy at best, "sugar and something…" I googled and found this on http://www.picknpay.co.za we found that the recipe made pretty matt looking toffee apples which is pretty weird but once we cut down sugar by half a cup we were in business…I added the sprinkles because #1 it looks cute, #2 we had left over from making cupcakes… Here is recipe, have fun 🙂

Place apples in a large bowl and cover with boiling water (you may have to do this in batches).

This will remove the waxy coating and help the toffee to stick.

Dry thoroughly and twist off stalks.

Push a wooden skewer into the stalk end of each apple.

Place sugar and water in a heavy-based saucepan over a low heat.

Bring to the boil and stir in cream of tartar and food colouring.

Simmer toffee for 20 minutes or until it reaches hardcrack stage.

Check by dropping a teaspoon of toffee into a glass of cold water.

If the toffee solidifies and cracks easily, it's ready (it shouldn't feel sticky).

Working quickly and carefully, dip and twist each apple in toffee until covered, let any excess drip away, then place on baking paper to harden.

You may have to heat the toffee a little if the temperature drops and it starts to feel too thick.

Leave toffee to cool before eating.

Can be made up to two days in advance and stored in a dry place.