So I decided it’s time I get back to showcasing South African brands and where better to start than the home grown, African in every stitch, Stoned Cherrie, label?

I love Stoned Cherrie, it’s a eclectic mix of high fashion and traditional with plenty of MUST HAVES for the Afro chic chick:

Stoned Cherrie, is an afro-urban lifestyle brand that is said to be expressive of African urban culture in South Africa. It was established in 2000 by the ultra impressive Nkensani Nkosi (you know award winning entrepreneur, television personality and actress, who happens to hold a degree in Industrial Psychology and Sociology and writes articles for O Magazine, Y-Mag, Going Up, amongst others) and has grown in the past twelve years to gain international appeal and saw the label being invited to exhibit at New York Fashion Week in 2009.

Last year the label received a blow when Foschini dropped it’s Love Movement line and according to the Sowetan‘s unnamed “insider”, Stoned Cherrie clothes were “too black for both white and black people. I think South Africans have moved from that African thing. They want something that unites them”.

I don’t think I agree with that, maybe that is because I’m neither black nor white, hmmmm. I still love the brand and despite that “setback” stoned cherrie is still a force to be reckoned with.

Here is what the brand has to say for themselves via http://www.stonedcherrie.co.za Here are some of my favourite Stoned Cherrie looks: 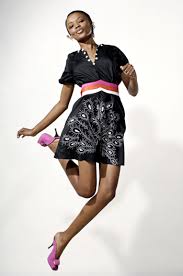