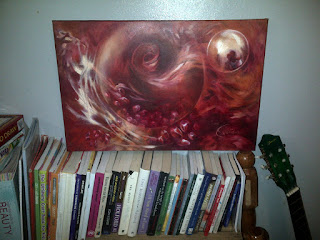 I had coffee with an angel yesterday, no this is nothing like the time I had lunch with a fairy God mother and she showed up with wings and a wand.
In fact I don’t even think “my angel” in her pale blue jeans and thong sandals had any idea of her angelic properties.
I reckon if I called her an angel to her face she would roll her eyes or pull a face, but the truth must be told 🙂
I met her by chance, an acquaintance thought that this woman with three angel babies in heaven could be an understanding shoulder to lean on, but I was not entirely sure she could. How could someone carrying so much pain have room on her shoulder for me to cry on?…
But I reached out – it couldn’t hurt – and turns out I’m glad I did.
For weeks now she has been an important part of my support system, someone I could gauge the “normality” of my reactions on and she gladly offers support despite having a gorgeous, big eyed, giant spirited, one-year-old to run after (her adopted rainbow)
(I have four other mums,who understand the loss of a newborn, I lean on them often, but with two of them having new babies in the house, I’m careful not to unburden on them too much and pull them back to the pain and the other two’s pain is still fresh so I try not to be a nuisance)- The great irony of my life is, meeting these amazing woman and having pain in common.
Anyway I had coffee with an angel yesterday, an angel whose sparkling blue eyes carry both pain and hope. She asked me questions no one else would dare ask, “have I chosen a grave stone?”, “Does visiting his grave bring healing or pain”
We laughed at things others would find inappropriate and fought back tears over each others stories.
She understood my feeling like an outcast and a oddity in the same way she understood my appreciation for my support network and gave validity to some of my darkest thoughts.
And best of all and most heart warming of all, she told me my son was beautiful (I happen to already know that,he he) Even my closest friends prefer to not look at his picture, and here she is, she sees him as my child, with his dads tall frame and mums dark hair, not a sad event in my life, an important part of my life.
And as the angel left she gave me the gift of her friendship and a beautiful painting, she explained it meant “hope for the future”…With her hopes being fulfilled in her little boy she is passing on the baton of hope, and that right there is something only an angel could do.
-I’m very thankful for her and one day I want to be an angel to some one else

If you must know
For my pretty boy
Letter to Logan, on his two month heaven "anniversary"