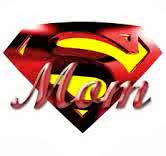 When I was a little girl I always thought moms had super powers…they could just be everywhere, know everything and fix everything….in hindsight the moms I knew then were about my age now so if the super power thing were true it should kick in round about now and you know what? I think it is . . . *cue soap opera style music*
I've always been clumsy, its not that I'm uncoordinated per say its just that my vision without contact lenses/glasses is severely lacking and I often have so much going on in my head I simply don't look where I'm going which often results in me having tons of unexplained blue marks and broken crockery….but when it comes to Aidan that's not the case…with him in my arms I could replace one of the Mario brothers and make it to "screaming princess level"
I have pretty much always been off in my own world and my mom would have to do the "Eleanor don't make me call you again" voice before I'd realize I was called in the first place, but now with Aidan asleep in his room I can hear him silently wake up or even just kick blanket off over the sound of the blender and Robs X-box…
Me "he kicked blanket off again"
Rob "how do you know that?"
Me "sounds from his room sound different,less muffled"
Rob "you know you are crazy right"
*check his room*
Me "crazy? Maybe, right? Definitely"
Aidan (even though he is quite serious) has always been a very active kid (can't just do 1 thing at a time) like breast feeding can't just be him laying there drinking "no way Jose" his legs have to be involved in some acrobatics while his hands investigate my clothes and he stops to chat along the way…if I happen to have my phone in my hand I need to be ready for any surprise attacks because he loves this thing [I even struggle to get cute pics of him these days because the moment he sees the phone he drops what he was busy with]
His busy ness [think he is making up for time lost in NICU] his training for the pacifier spitting contest and constant spitting up makes the image of me juggling a 7kg+ baby while catching a flying pacifier and cleaning spit up off Aidan,myself and anything else that gets drenched, pretty common…this doesn't make for best comic book , but its pretty impressive (knowing my history)
My busybody is under the false. impression that he can sit upright and even stand, so he spends much of his time trying to wriggle out of your arms to "do his own thing" which calls for some mean upper body strength…the same strength needed to bath him (his bath times bring to mind the Africans nursery rhyme "AS BOETIE BAD is allies nat" roughly translated "when brother baths everything is soaked) the same strength is needed when trying to get this little anti-sleep activist down for the night.
Let us not get into the mental strength needed not to freak out when you are bitten while breast feeding are spit up on, your hair gets pulled, or are scratched [this kids nails need to be cut every second day,its crazy] or the stamina needed to operate on very little sleep.
but its all worth it and although I'm by no means 'the perfect mom" and I can't fight some smooth talking super villain while keeping my hair perfectly sculpted, there is something to. be said for "mom powers" and I look forward to. discovering what comes next….

HAVE A GREAT DAY
(pic filiciana.com)

I climbed a wall and I liked it (Valley Crag review)
Making reading even more fun with crafts...
Back from a week of nothingness, with a new mantra