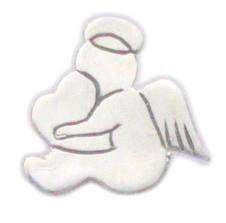 Death tends to taint things, make it as if nothing good was there before. Robin and I started talking about Logan last night, not our usual sad conversations about making it through and the injustice of it all. We spoke about our son and the happiness he gave us in the six months he was on earth and we were able to smile through the tears…
Here are things we can remember
– excitedly telling every1 we were expecting, we couldn’t believe our luck, we were going to be parents
– seeing how crazy busy he was on scans, at one scan, 3 months or so, it looked like he was crawling
– when we went to find out his gender, he wouldn’t lay still, the sonographer actually asked if I had an extremely sweet breakfast, but no, my little boy was just THAT active, THAT full of life
– When we found out we were having a boy, we made biscuits covered in blue icing, I still remember how excited the whole family was, they were so elated with us
– I remember sending pictures to Robin while he was away at training, he was so desperate to be part of every moment, I will always love him for that
– I remember how he’d kick me if he didn’t like the position I was sitting in-the Lord of the manor from the start
– It was probably just my imagination but I could swear I could feel his heart beat if I put my hand on the right place on my tummy
– I remember the last scan we had with him, it was the 4d scan the day before his birth, and he was so cute, such a little model, posing for the camera, he had everyone in the room gushing
– when he was born he surprised everyone by simply breathing, the doctors didn’t think he’d breath after birth but he made his presence felt with a cry (I was not awake for this but family say they could hear him from waiting room)
– he also peed on the doctor- definitely got his parents love of a good joke
– he grabbed his dad’s finger, I had the pleasure and  joy of carrying him for over 26 weeks, it’s only right his dad got a special moment with him after birth
– he looked so much like his father it took me by surprise but Rob saw him open his eyes and tells me they were un mistakenly mine, that’s sweet to know
– he was so active in NICU a nurse commented that she reckoned he didn’t like to be covered, especially his feet, which is cute because I often don’t like my feet covered in bed
– He lived a much longer than expected, because THAT is just how tenacious he was
– he was surrounded by love at his birth (people from all over, family,friends,colleagues and acquaintances all prayed for him) and when he was laid to rest (the funeral director, commented that it was the most people he had seen gather for such a young baby’s funeral)
– I have received messages from so many people telling me Logan has made an impact in their lives, which shows how special he is
* So when the grief gets too much this is what I hold onto, I’m the mother of an amazing little boy, an angel child