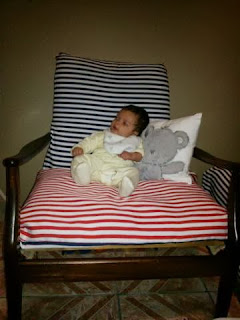 Here is this month’s catch up;

APPEARANCE: weighing 5.45kg and 59cm tall he is certainly growing well and turns out he has dimples (you can see when he smiles,which isn’t that frequent yet)

PERSONALITY: He has been sick so it is not easy to say what he is like, but when he is not feeling poorly Aidan can talk and kick up a storm…he has the cutest smiley face but you don’t get to see it often as he has to take a liking to you first , everyone including toys get his “frowny confused” or “stop annoying me” look though. He gets his selective socialising from his dad. *can’t look face*

ROUTINE: There is currently no routine because he is sick, mostly it is trying to console him and checking on him so he doesn’t choke on his spit up. He is awake much more now though and so cute

LOVES: Licking things! He has new lizard-like habit of tasting things, mostly his blanket, hands and my tops, whenever he is settled and content its almost a given that his tongue will poke out soon.

DISLIKES: Being tired! The scratching and kicking is getting old in my opinion but that’s how he settles *yawn*

FIRSTS: He stands on his very strong legs when being held and lifts head during tummy time…he grabs hold of things, smiles and laughs (when he feels like it) and copies you when stick out your tongue or make “kissy face”

MOM: I’m finally getting out and even went to a party last week.. But generally I just hang out with Aidy and the “bed head” look I’m sporting is not cute or ironic, I just don’t have time…really want to take up jogging and squash again though (not a fan of my current size) but will need to wait for Aidy to feel better…

7 months and counting
Grabbing those cuddles while I can
Brag book:look what I made,hehehehe