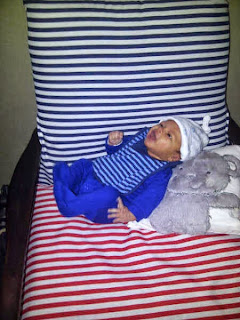 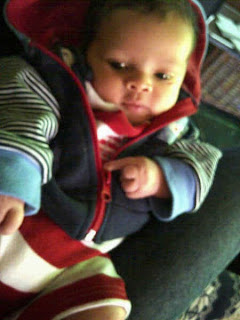 This post is long overdue, in fact although this is his “one month update” Aidan is actually six weeks old already. I always planned to do monthly updates for his first year (a less sad version of what I did for year after Logan’s birth) and although I’m a bit late I figure better late than never 😉
Aidan Jesse Meyers:
APPEARANCE: He is such a tall baby, or maybe he just seems that way because his mother is such a shorty. He has “filled out” nicely with chubby arms and legs slowly replacing his skinny limbs. He has a full head of hair and eyes still don’t have a definite color
PERSONALITY: He is quite the moody one but is mostly an adorable cooing little thing who tries to make conversation with you and “shouts” at his toys. You can definitely see any displeasure on his face though. He has no patience and will scream his little head off when he needs to be fed or changed. He also has shortest attention span ever (which is to be expected I guess) so you constantly need to find something new to entertain him.
ROUTINE: He is awake more often now and HATES being put to bed, he literally kicks screams and scratches but that’s mostly after 10 at night which is his “fussy time” (it takes him ages to fall asleep any time of the day though) he naps quite fine in his moses basket during the day, but at night its like there are motion detectors in there signaling him to wake up the moment he is put down.
LOVES: Food ooh this kid loves to eat and I feel like I’m constantly feeding! His bouncy chair keeps him entertained longer than anything else and taking him out to see trees instantly calms him
DISLIKES: Being woken up and being made to sleep (go figure) he also hates being naked (bummer as he needs to be changed often with the peeing on himself)
HEALTH: he suffers from Reflux and currently has pretty bad flu that has affected his chest really badly and makes for one cranky kid who isn’t biggest fan of meds or the fact that he has to sleep sitting up in order to breath
MOM: I’m still getting used to things but am surprised daily at what I can do, like operate on 3 hours sleep a day and doing day to day operations one handed. I’m suddenly a multitasking pro and although I still get frustrated A LOT I feel less like a basket case and that’s good 😉
*chair picture taken at one month old exactly

Aidan's guest crafting post...
7 months and counting
Aidan at two and a half